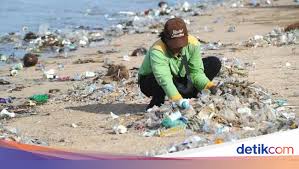 Jakarta | Thu, October 8 2015 | 06:21 pm
A water management specialist from Dutch research institute Deltares has confirmed that the National Capital Integrated Coastal Development (NCICD) project, known as the Giant Sea Wall (GSW), will have an environmental impact, but says that land subsidence in Jakarta is a far greater threat and the wall is one of the solutions. Jan Jaap Brinkman said on Wednesday that the project might affect the Thousand Islands as well as erosion patterns, coral reefs and biota. However, Brinkman argued that the project was an urgent measure to protect four to five million people threatened by land subsidence that would see their current homes 4 to 9 meters below sea level. ‘Everybody keeps forgetting and ignoring the land subsidence, this is the driving force,’ he said.
Jakarta is sinking an average of 5 to 20 centimeters per year, with an average of about 7.5 cm per year. Brinkman added that if the land subsidence continued like this, by the end of the century Jakarta would have sunk another 5 to 6 meters. Brinkman said the ‘cheapest and easiest’ solution to land subsidence is to stop groundwater extraction. Millions of households, offices, and industries rely on groundwater as the coverage of tap water is only about 60 percent. ‘However, if the sinking does not stop, Jakarta has only two options to protect its people,’ he said. He went on to say that they comprised evacuating millions of people and buildings from northern Jakarta to higher ground or enclosing Jakarta Bay with a ‘good, very safe dike, good very large pumps and a very large lake to store the water: the giant sea wall’.
Recently, the Research and Development for Marine and Coastal Resources Department at the Maritime Affairs and Fisheries Ministry showed that the giant sea wall would have large environmental and social costs, including the disappearance of islands and the damage of biota in the sea. The ministry’s study claimed that it would also destroy the biota in the water inside the wall because of eutrophication process from the pollution of Jakarta’s 13 rivers, and displace thousands of fishermen. The study was conducted by more than a dozen researchers in 2014 by making a simulation of the GSW. The result was published as a book, Dinamika Teluk Jakarta; Analisis Prediksi Dampak Pembangunan Tanggul Laut Jakarta (The Dynamics of Jakarta Bay; Prediction Analysis of the effects of the Giant Sea Wall Construction), by IPB Press.

END_OF_DOCUMENT_TOKEN_TO_BE_REPLACED

Research Center For Climate and Atmosphere

Look inside of the Book

How to order (Cara Pemesanan):